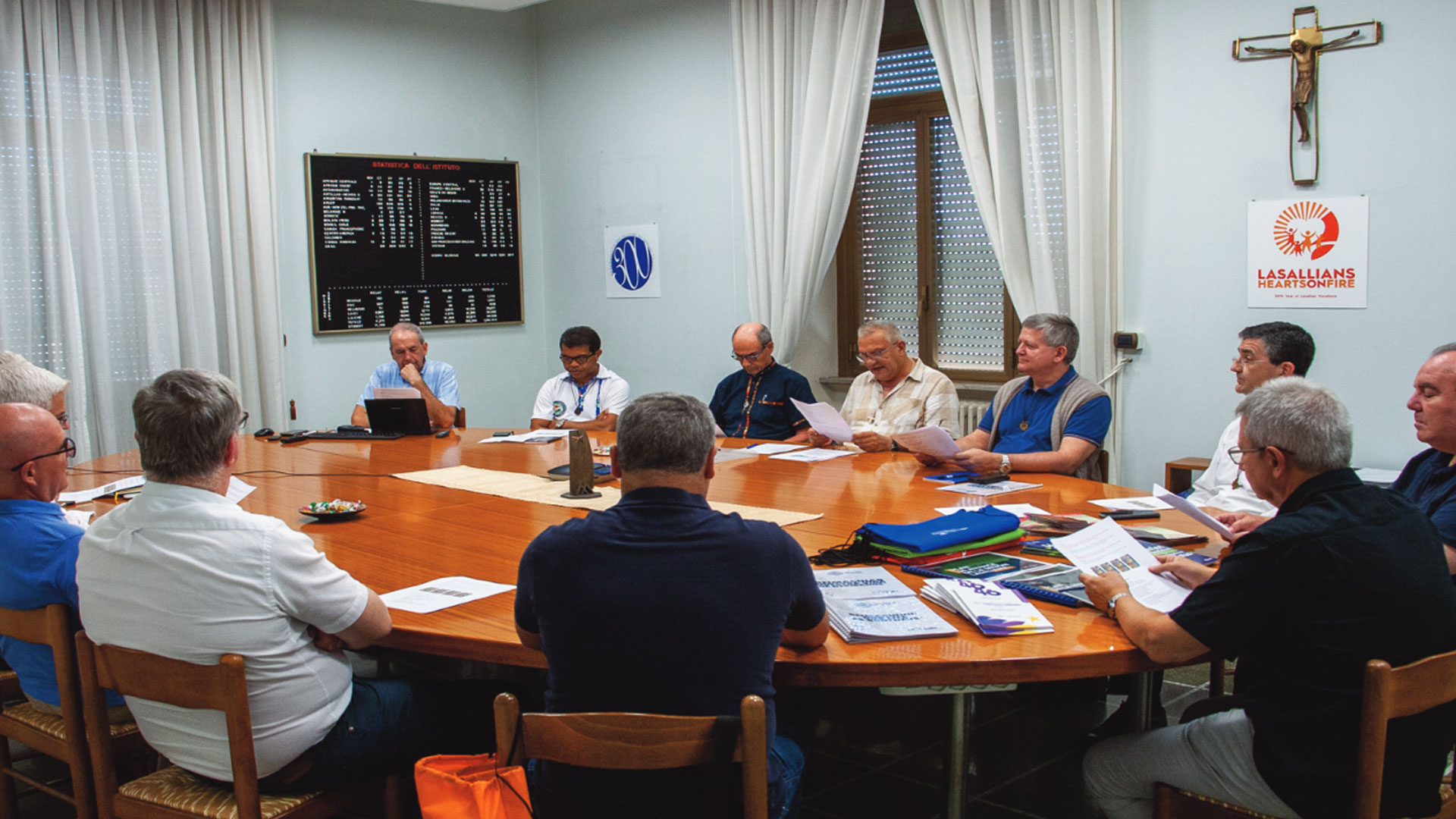 The 19th Plenary Session of the Council was supposed to bring together Brother Superior and the Brother Councilors in Rome from September 14 to October 14, 2020. However, due to the travel restrictions related to the pandemic, we resorted to videoconferences. Brother Superior General, Robert Schieler, from the United States, Brothers Jorge, Vicar General, Gustavo Ramirez and Aidan Kilty, General Councilors, Antxon Andueza, Secretary General, Patrick Duffy, Secretary to the Superior General, participated from Rome. The other Brother Councilors connected from the four corners of the world: Paulo Petry from Colombia, Rafa Matas from Majorca, Ricky Laguda from the Philippines, Timothy Coldwell from the United States, and Pierre Ouattara from Ivory Coast.

We devoted our first sessions to sharing what happened since our last session at the level of the Regions, the mission and the personal lives of each one. Several activities initially planned had to be cancelled because of the pandemic. Nevertheless, the general opinion was that the Regions have been able to adapt to the pandemic by organizing videoconferences and distance learning courses. They have taken initiatives to respond to the various distress situations created by the health crisis. Brother Visitors have been able to provide mutual support from a distance. In short, we admire the responsiveness of the Lasallian world to this time of multiple crises: they launched various fundraising initiatives to assist families and schools, especially in Beirut, as well as other initiatives for peace, against racism, etc.

Everywhere in our Districts, communities and ministries, people respect rigorously the safety measures and the security restrictions. However, the pandemic hit some of our communities harder than others. In the Retirement Community and Care Home in Laval, Quebec, 32 residents died, including 10 Brothers who were between 80 and 90 years of age. The epidemic is now contained and community life is stable. We live in times that invite us to be more fervent in our prayers. The improved health of Brother Superior General, Robert Schieler, allowed him to participate in the annual retreat of his community in the United States, in various videoconferences with the Brother Visitors of RELAL, RELAF, RELAN, RELEM, and CIAMEL and the International Strategic Committee. He remained in the United States because of ongoing medical tests and examinations as well as the travel restrictions related to the pandemic.

The General Council of the Marist Brothers met our Councilors at the Generalate and were joined by other Councilors around the world by videoconference. On this occasion, we had a very enriching exchange on our different experiences and responses to the pandemic. The questions raised deserve to be highlighted: what has the pandemic taught us? How do we deal with it? Will it finally have a positive or negative effect on us as a congregation, on our respective missions?

During this plenary session, the Bursar General, Brother Martín Rocha, accompanied by Doctor Lombardi of CBIS-Global, presented the financial situation of the Generalate. He presented the proposal to establish a special contingency fund to deal with unexpected events. He also shared with the General Council the provisional fruit of his discussions with the Secretariat for Solidarity and Development and the Secretariat for Formation on the future management or establishment of funds for formation, mission, retirement provision and health insurance for Brothers. The Council decided to suspend the contribution of the Districts to the Solidarity Fund for this year because of the financial difficulties created by COVID 19. This contribution will be taken this year from the funds of the Generalate. There is an ongoing reflection on the principle of extending the contribution to all the Districts of the Institute.

As in other plenaries, the Council also dealt with different administrative questions concerning the Institute, the Districts, and the particular situations of some Brothers. Brother Diego Díaz was appointed as Visitor of the District of Bogotá for four years. Mr. Keane Palatino and Brother Bob Schaefer reported on the preparation of the Young Lasallians Symposium and the Young Brothers' Assembly. The Young Brothers' Assembly will take place over two weeks from October 10, 2021 to October 24 and the symposium will take place over one week from October 10, 2021 to October 16. During this week, young Lasallians will have the opportunity to interact with the Young Brothers.

We also reviewed a number of projects that are in development. These included the elaboration of a Code of Ethics for the Generalate with the purpose of ensuring that it is a safe place for children and vulnerable persons. The ad hoc committee set up for the elaboration of this code, led by Brother Nestor Anaya and Angela Matulli, presented a second version of the document to the Council. Brother Paco Chiva, from the Secretariat Association and Mission, reported on the composition of the "think tank" and the progress of its work on Lasallian spirituality.

Various commissions and secretariats also presented a report to the General Council. Brothers Gustavo and Nestor, as members of the International Council for the Lasallian Mission, presented a preparatory report for AIMEL. Brother Antxon, Secretary General, reported on the last meeting of the Preparatory Commission for the 46th General Chapter. The Councilors also continued their contributions to the report of the Brother Superior General to the next General Chapter.

The next session of the General Council has been scheduled for February 2021, and it will be either face-to-face or by videoconference, depending on the evolution of pandemic conditions.