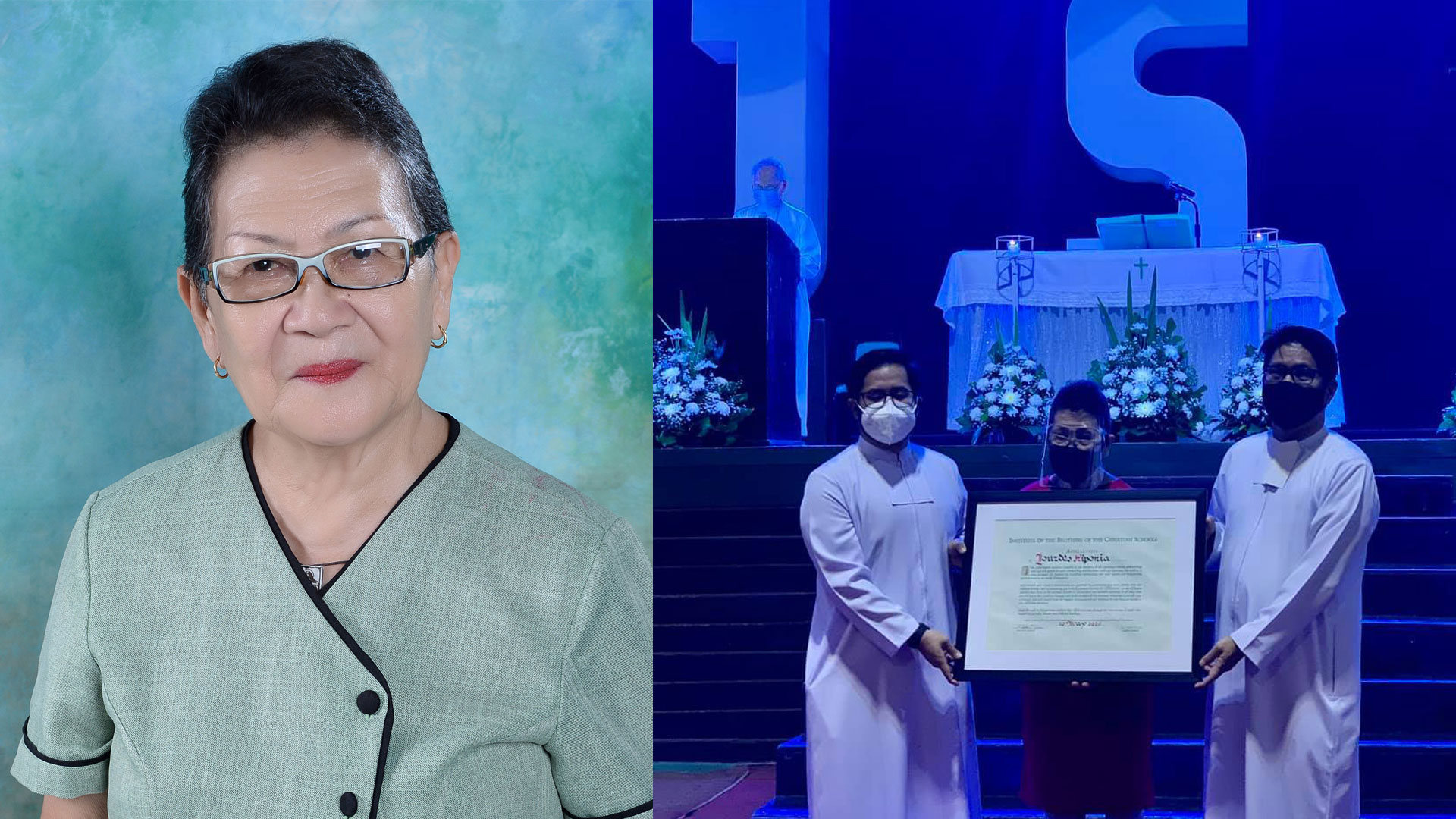 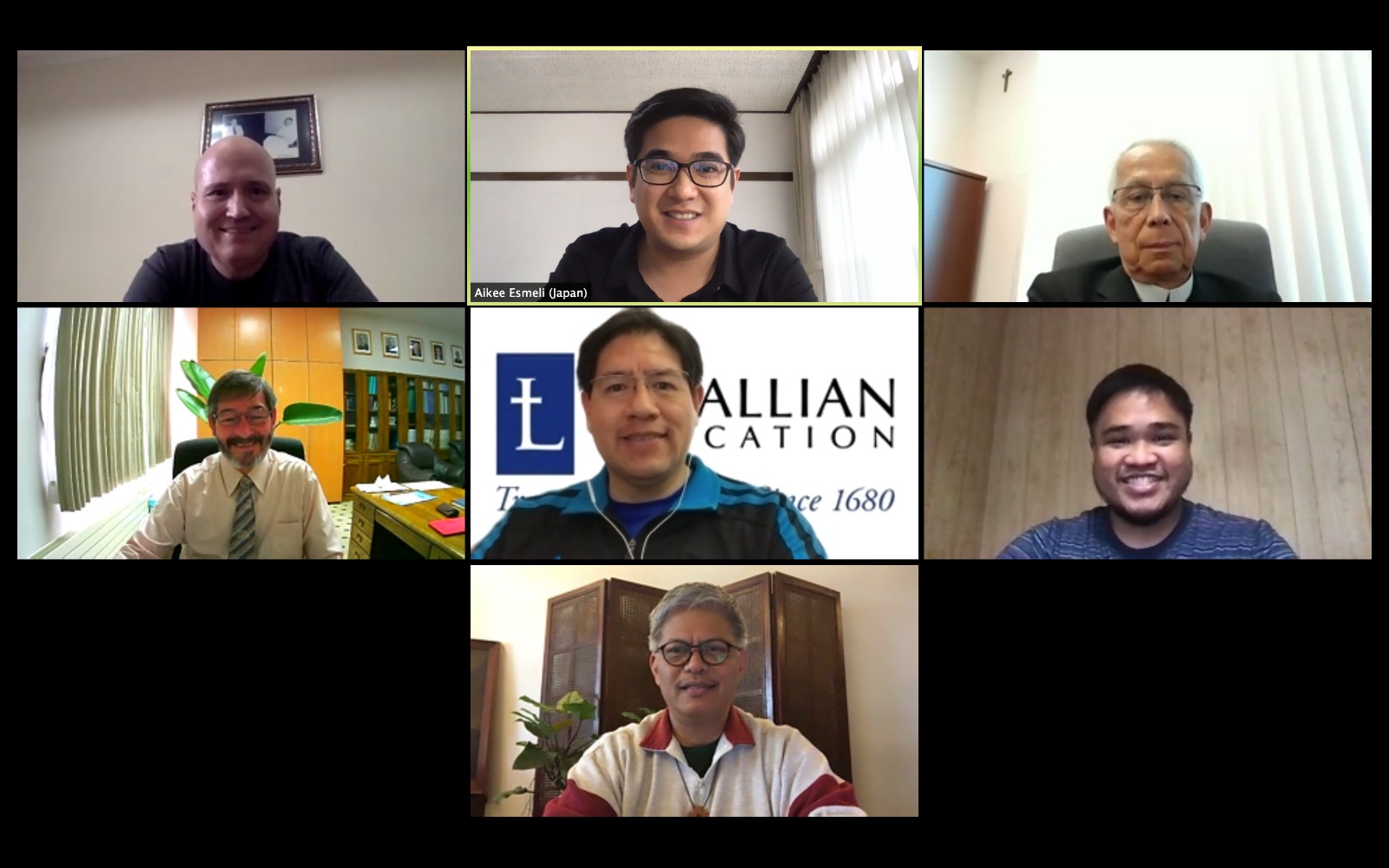 Brother Visitor’s Visit To The HIBC 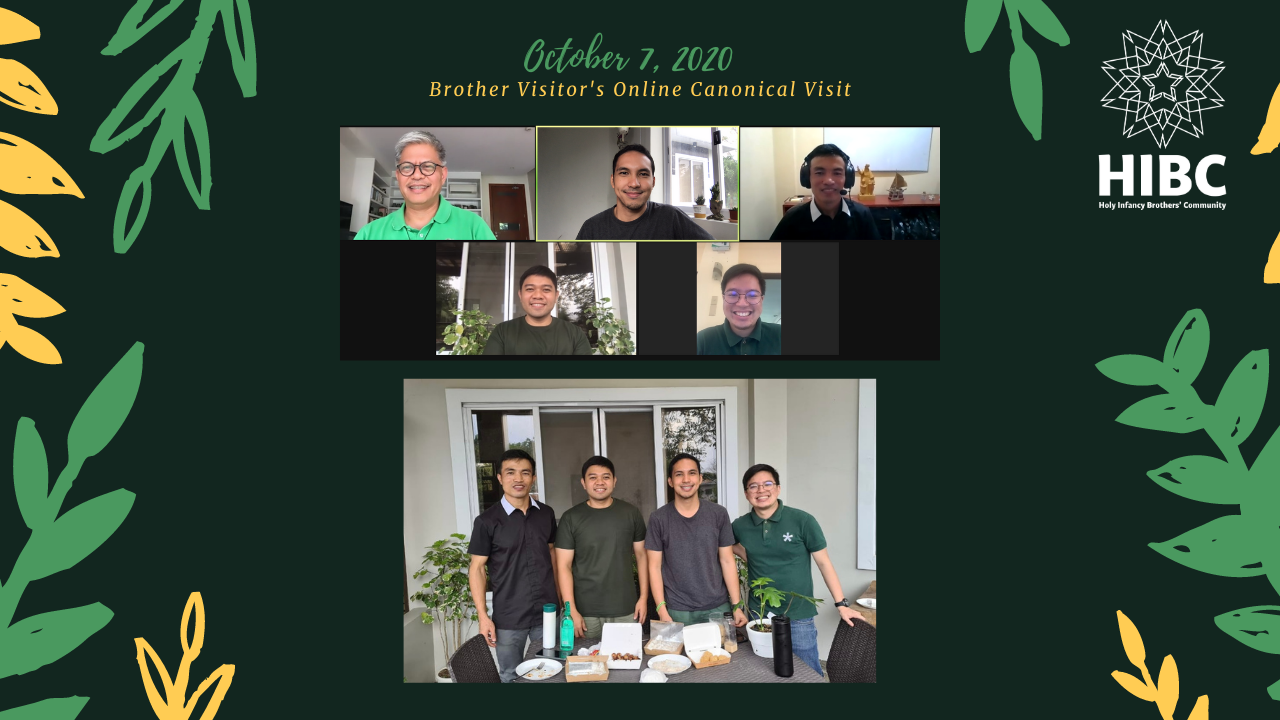 PHILIPPINES -“The Brother Visitor is at the service of his Brothers, ready to listen to them and remaining in contact with them.” (Rule 142)

A canonical visit is a principal occasion in which the Brother Visitor evaluates a Brothers’ Community in its faith, apostolic, and fraternal life. Additionally, more than evaluating, the Brother Visitor looks over the welfare and the disposition of each Brother by having a one-on-one reddition with him to ensure the community’s unity and vitality.

This is why on the special occasion of the Memorial of Our Lady of the Rosary, October 7, 2020, the Brother Visitor of LEAD, Br. Armin Luistro FSC, had his first canonical visit this year to the Holy Infancy Brothers’ Community (HIBC) in Iligan City, Philippines. This was done for the first time through an online video conference due to the extraordinary time that the world is experiencing. After a series of individual interviews with each Brother, he initiated a community dialogue where reflections of the community were shared and the plans for the District were discussed.

The community then celebrated the canonical visit by enjoying a simple merienda to live out their fraternal bond and witness the presence of God in each other. (Text: Br. Chuck Magno FSC; Photo: Br. Ivan Umali FSC) 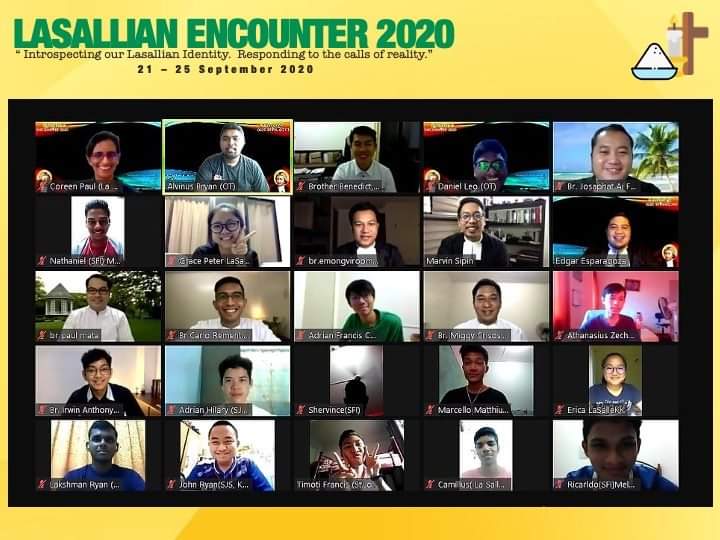 MALAYSIA - La Salle Centre Ipoh recently ran its vocation programme called Lasallian Encounter from the 21st to 25th September with the theme “Introspecting our Lasallian Identity, Responding to the calls of Reality”.

This annual programme was conducted virtually for the first time. There were 2 hour sessions which ran over a period of 5 days. 21 students registered and twelve of them faithfully attended all 5 days.

The programme was facilitated by Brothers Marvin and Edgar who approached the programme with a 3-part focus. It started off with a focus on self which essentially touched on vocation being a gift from God and in order for us to discover what we are meant to do with our lives, it is important to have deeper knowledge of ourselves. After having an appreciation of one’s vocation, the learning was strengthened by discovering how St. John Baptist De La Salle lived out his vocation and spirituality. The participants were blessed with an opportunity to dialogue with 8 young De La Salle Brothers. The third and final part looked at how God calls us personally to live out our vocation the best way we know how and a reminder that every vocation is a commitment to love.

The programme was brought to a close with a prayer service where the participants took an oath of commitment to try their best to serve as positive role models and become living witnesses of the Lasallian core values of the Spirit of Faith, Zeal for Service, and Communion in the Mission.

Each participant was given a customised frame for their profile pics as a reminder that they are called to be the salt and light of the earth.

We would like to express our gratitude and appreciation to Brothers Marvin and Edgar as well as all our guest speakers, Br. John Ong and Mr. Keane Palatino. The very same goes to the young Brothers who took time to be with our young Lasallians and share their vocation stories, Br. Carlo Rementilla, Br. Irwin Climaco, Br. Benedict, Br. Paul Mata, Br. Raphael ‘Miggy’ Crisostomo, Br. Edmon Viroomal, Br. Josaphat Ai Saw Hung Htoo. 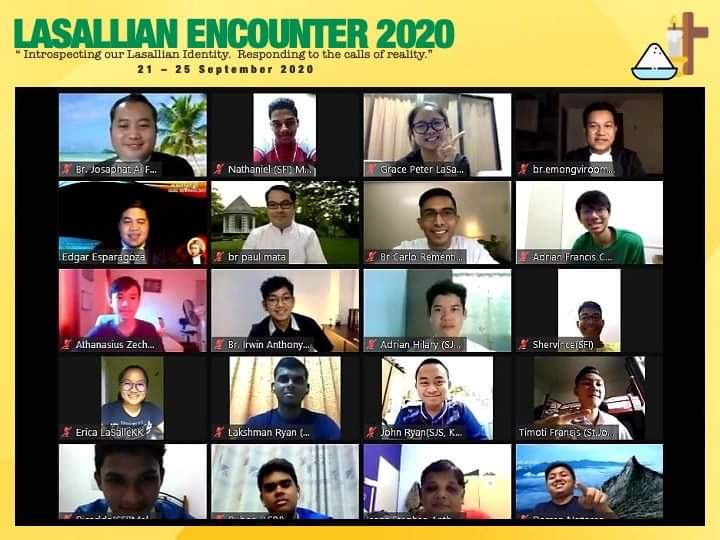 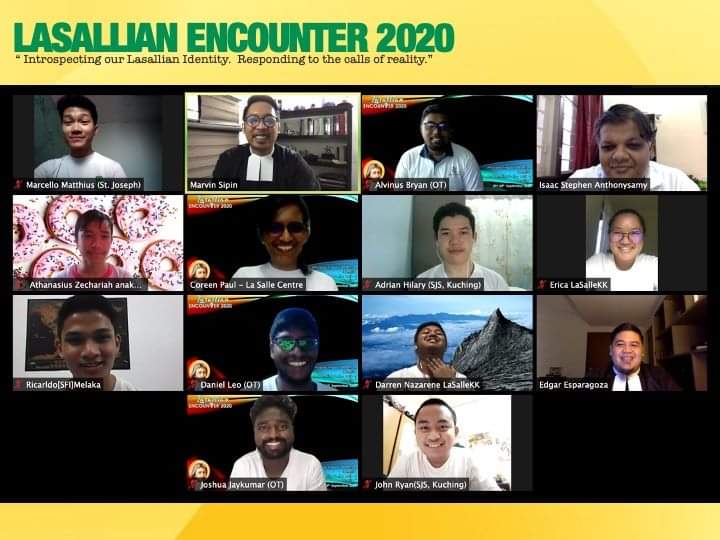 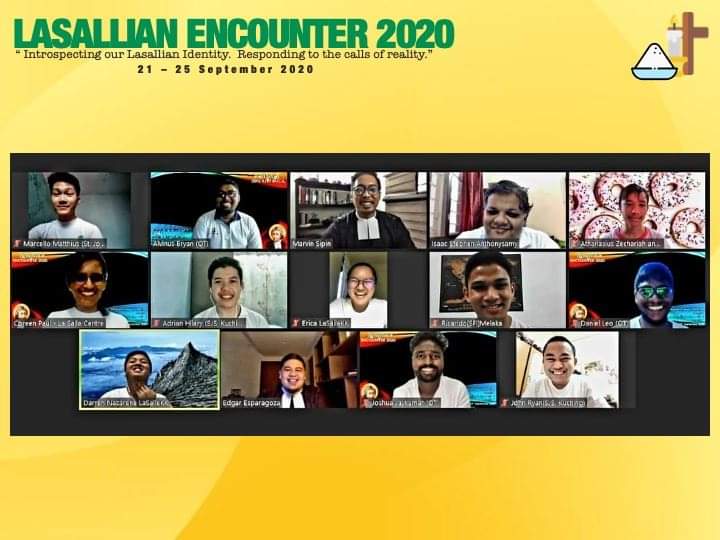 Month Of The Holy Rosary

THAILAND - “Hail Mary, full of grace, the Lord is with thee; blessed art thou among women, and blessed is the fruit of thy womb, Jesus. Holy Mary, Mother of God, pray for us sinners, now and at the hour of our death.

”As this month is the month of the Holy Rosary, let us be united in prayer asking Mama Mary to pray for us as we are all her children. We firmly believe that she is the mother of God; she has the privilege and powers to ask God’s providence helping us in every action in our daily lives.

She is a vessel of Honor; full of grace, love, and spirit. She brings the Lord to us and assures us with faith and blessing. She protects us from the fire that burns under our feet; the fire that tries to burn away our holy shield. This shield is the Queen of the Saints. We believe she protects us just as our mother does. She does not let temptation break us; she gives us strength to fight the toughest fights. She protects us. She gives us our greatest gift, the author of life, the Messiah, who came and saved us from sin. The Virgin most faithful never fails us. She loves us entirely.

We, the Brothers of La Salle Nakhonsawan Community together with the representatives of La Salle Juniorate, are praying to Mama Mary in order that she would help us and protect us from all harm especially in the time of the pandemic. Therefore, let us continue praying to her with faith and devotion. 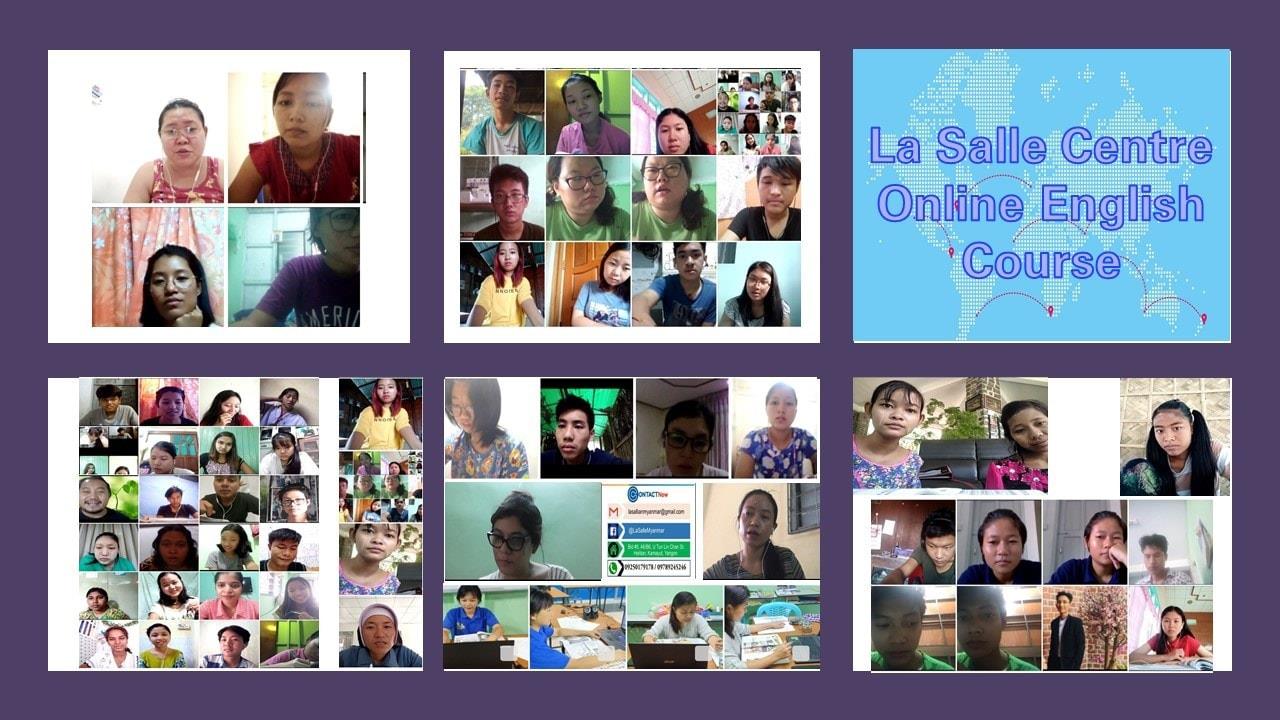 MYANMAR - All the schools and Education Centres in Myanmar have to take an indefinite break due to the COVID-19 pandemic. A powerful second wave is hitting our country now. Considering new normal realities, the La Salle Centre decided to offer online classes for English Learning Programs for five different levels (Beginner Level, Level 1, 2, 3, and 4). We started our online classes for English Learning Program on 2020 August 12 with a total of 48 students. Our 2-month Weekday Program runs from Monday to Friday for two hours per a day. We also offer a 3-month program for Weekend classes (Saturdays and Sundays) two hours per a day as well. On October 15th, we started a second batch for Online English Learning Program. We hope that we will have a bigger number of students in the second batch because of the reputation we have gained from the 1stbatch. We received much positive feedback from the 1stbatch which is quite encouragingfor us. God bless you all. Stay Safe. (Text & Photos: Br. Joseph Aung FSC) 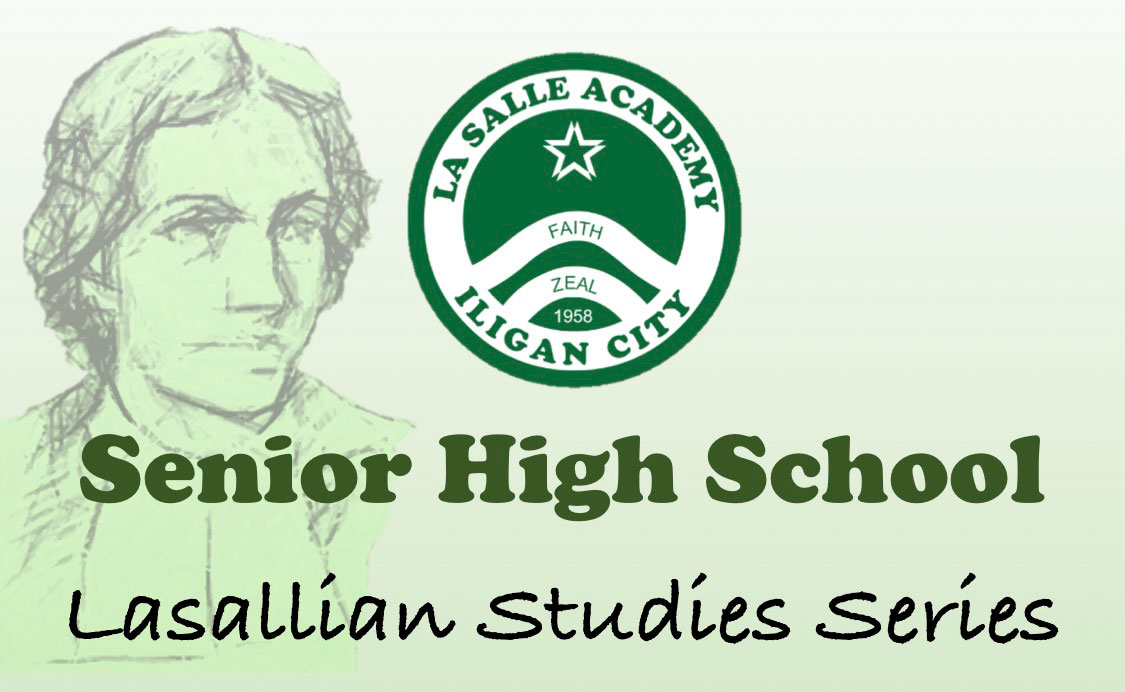 PHILIPPINES - La Salle Academy (LSA) opened the extraordinary school year 2020-2021 through distance-learning education. The school and the Holy Infancy Brothers’ Community (HIBC) initiated a new and creative way in delivering and sharing with the Senior High School (SHS) students the essence of being a Lasallian. The Lasallian Studies Series (LSS) program is a non-academic course that is a break from the other subjects. LSS’ main objective is to make sure that all SHS students finishing in LSA will further appreciate the identity, spirituality, mission, and vocation of a Lasallian. The program is divided into four parts and spread out within the entire school year: (1) Who is St. La Salle? (2) Lasallian Spirituality, (3) Lasallian Mission, and (4) Lasallian Saints and Vocation. The HIBC Brothers created and designed each part of the series that can be accessed at any time by the students. Also, the teachers are encouraged to take part and journey with their students in rediscovering their rich Lasallian heritage. (Text & Photo: Br. Henry Gyi FSC) 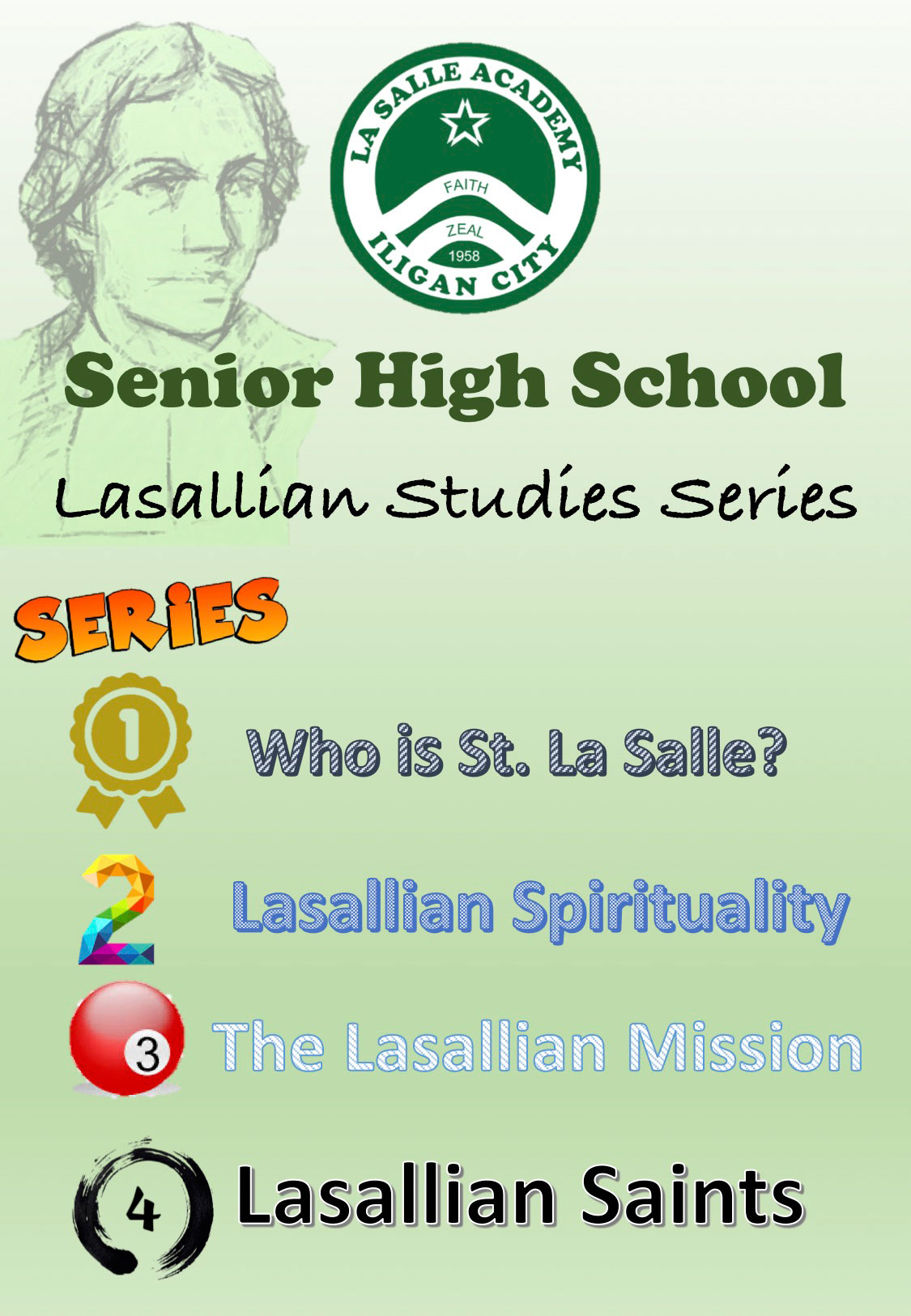 Ever wondered why Hong Kong was chosen to be the location of the LEAD Provincialate? 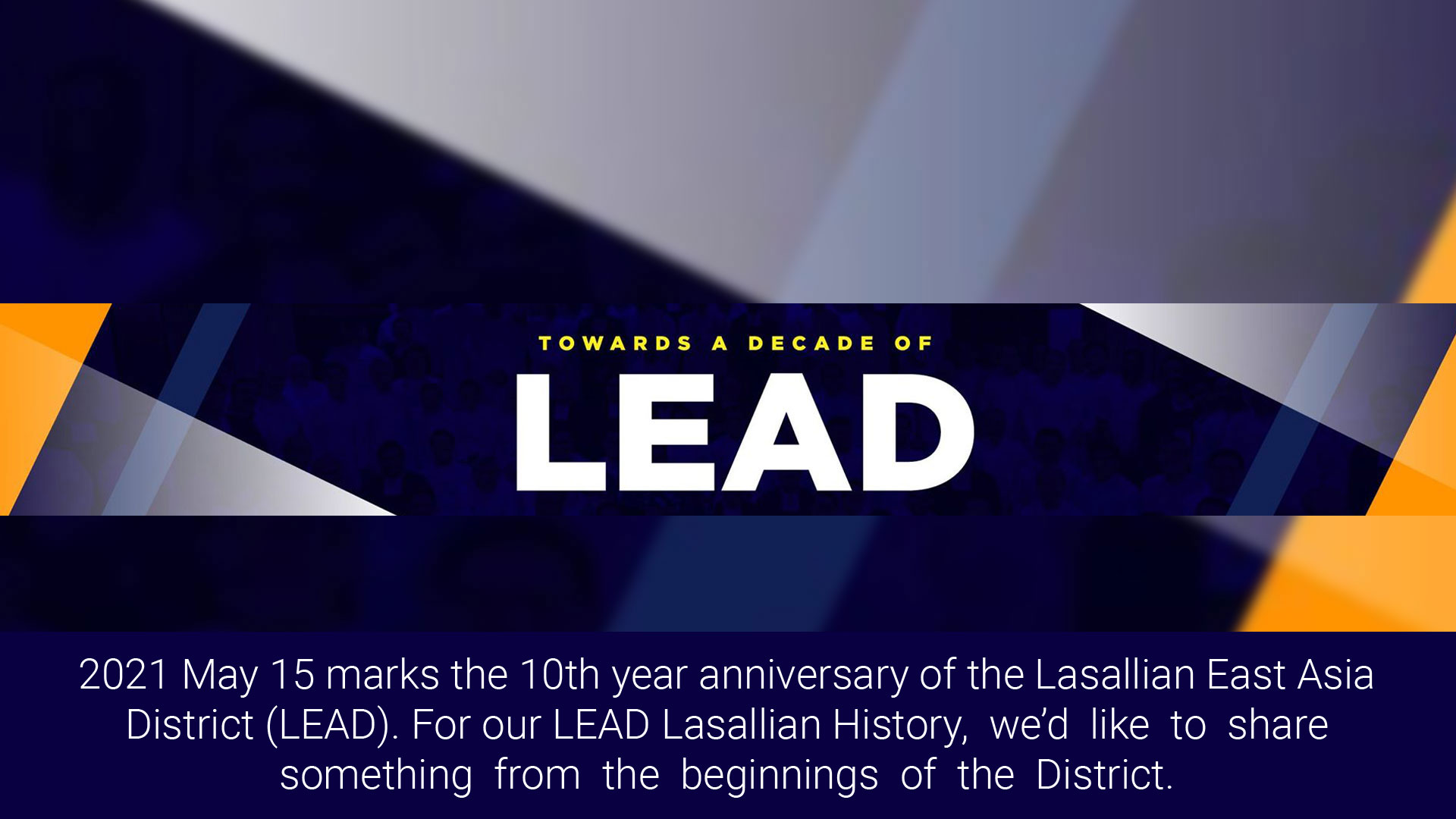 Ever wondered why Hong Kong was chosen to be the location of the LEAD Provincialate?

Br. Patrick Tierney FSC, one of the 3 Auxiliary Visitors of LEAD, shares the genesis of the LEAD Headquarters in Hong Kong.