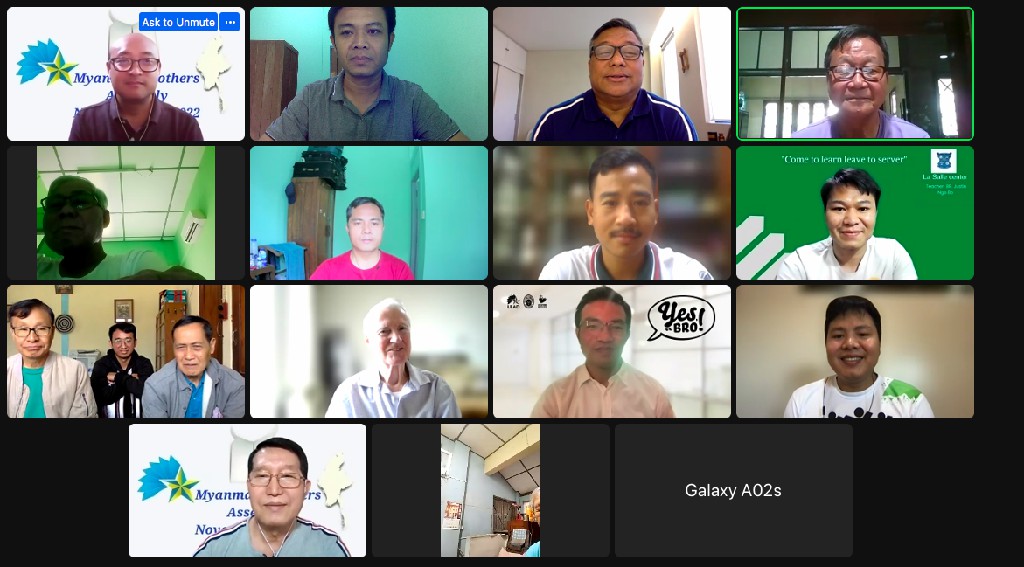 MYANMAR - The Myanmar Sector Assembly came about when Br. Felipe Belleza FSC, Auxiliary Visitor, in his letter, expressed his fraternal care and concern as we continue to live out our vowed life and ministry in the midst of many challenges and difficulties. He further encouraged the Myanmar Brothers to start a series of dialogue and conversation with respective communities on matters that are important and relevant to the Myanmar Sector in relation to the LEAD District. Specifically, we were asked to reflect on the current situations and how the Myanmar Brothers intend to move forward in our collective mission despite the uncertainties in line with the LEAD District Assembly in December 2022 and LEAD 4th District Chapter in April-May 2023.

And thus, the Myanmar Sector Assembly was held on the 5th of November 2022 with the graceful attendance of Br. Patrick Tierney, Visitor and Br. Felipe Belleza, Auxiliary Visitor. Br. Lucas Thein, CDA Chair, facilitated the Assembly attended by all the Myanmar Brothers in the country and abroad.

The main aim of the assembly is for the Myanmar Brothers to meet, discuss concerns of the Sector and set directions for the life and mission in Myanmar in relation to the District Assembly and 4th District Chapter 2023. Br. Visitor, in his opening remarks, encouraged the Brothers to continue to hope for the wonders of God amidst the current challenges in the country. Br. Auxiliary Visitor also told the Assembly to draw encouragement and inspirations from the current situation and serve in the possible ministries despite the many limitations with a deep sense of faith.

After fraternal dialogues and discussions, two obvious pressing concerns emerged, Vocation Promotion/ Initial Formation programs and financial transparency in the Sector and in the respective communities. The Myanmar Brothers are fully aware of the importance of getting candidates in the initial formation program and agreed that there is a great need to update and upgrade the current local practices of vocation promotion and initial formation programs. A team of 4 Brothers was identified and formed, tasked with reviewing the current practices and policies, and drawing up programs that are more suitable for the realities of the country. As for finances, participants focused on better accountability and efficient use of the approved budget by the Sector Bursar and community bursars and in fulfilling the Resolution 09-2019 of the 3rd District Chapter - “Keep the Brothers regularly informed of the sources and uses of funds on different levels: community, institution, sector, District”. The Assembly agreed to form a finance committee to ascertain the precise and clear roles and functions of the respective bursars. (Text & Screenshot: Br. Lucas Thein FSC)