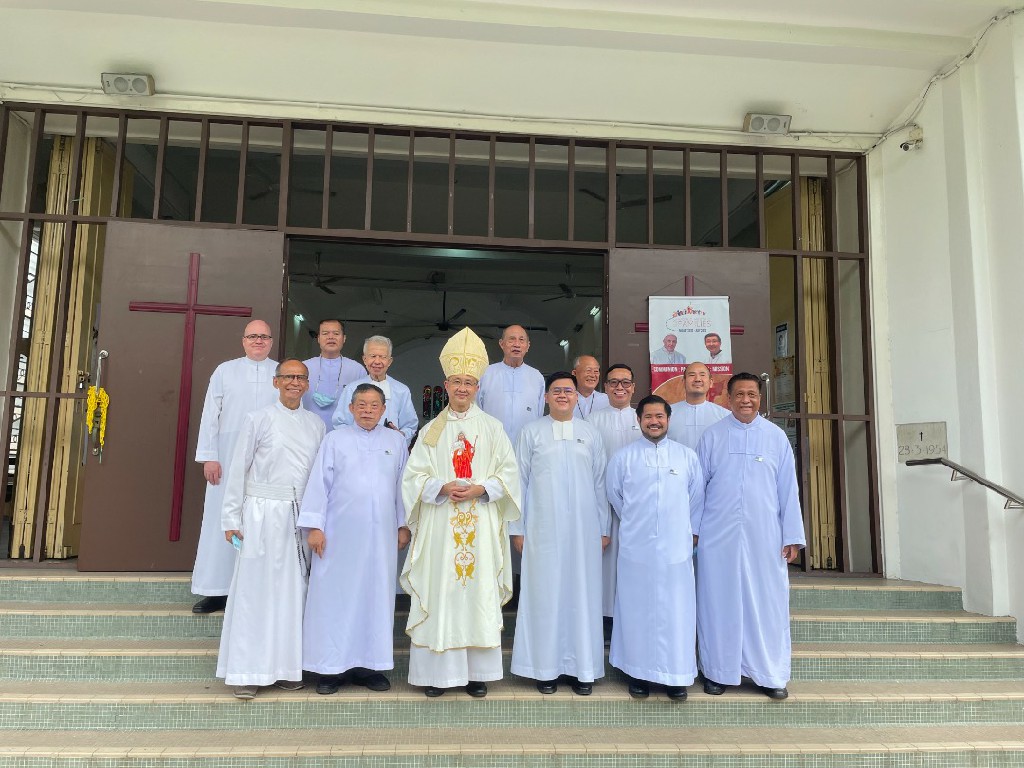 MALAYSIA - In conjunction with the 170th Anniversary of the arrival of the De La Salle Brothers in Malaya in 1852, the La Salle Brothers Malaysia in collaboration with the Malaysian Federation of Lasallian Alumni Associations (MFOLSA) organised a Thanksgiving Mass at St John’s Cathedral at 10.00am on Saturday, November 12, 2022.

In 1852 three members of the La Salle Brothers set foot in Penang and established the first La Salle School in this country, the St Xavier’s Institution. Soon Lasallian schools proliferated throughout the land with no less than 80 primary and secondary schools during the pinnacle years in the 60’s, 70’s and 80’s. The Brothers earned the respect of all – teachers, students and their parents. Tens of thousands of Malaysian youths received qual i t y wholesome education.

Archbishop Julian in his sermon said, “170 years of an Institution is not a short time. We are here to celebrate the Anniversary of the presence of the La Salle Brothers here in Malaysia. However, the journey has not been easy. Beginning 170 years ago, coming to the shores of Malaysia, I am sure the Brothers at that time had a very challenging journey. The challenge continues up to today as we just have to look around us too, the number of La Salle Brothers in Malaysia are few. It is a matter of time before we have no more Brothers in Malaysia if nothing is done!”

He posed questions to the congregation, “Have our La Salle schools become irrelevant? Have our Mission Schools lost their ethos, heritage? What are we to do today?”

“Your theme says it all, ‘Building New Paths, Transforming Lives’. The Magi, the wise men of the East returned by a different way. We have to find new pathways to be relevant again.”

Archbishop Julian in his message in the souvenir program for the 170 years celebration penned, “The La Salle schools have played a significant and crucial role in Educating our Nation wholistically. Catholics and those of other faiths were drawn to the teaching profession because of these La Salle Brothers. Their dedication and continuous support for the education and future of the students have produced all round citizens from academics and teachers right up to businessmen and entrepreneurs. Their focus was not only in academic results but also in other activities which would build their character. They are the natural melting pots of races, faiths and cultures that must be strengthened and enhanced. Lasallians are very faith oriented and believe in a meaningful life “Indivisa Manent” (Permanently Indivisible) a tag line which holds dear to their faith and way of living.”

This is indeed the moment for Celebrating Our Heritage as a part of the Lasallian Family in Malaysia. It is this recollection of our Faith Journey, moved by the original inspirations of John Baptist de La Salle in the 17th century, 300 years ago still echoes deep in our hearts for Building New Paths in the 21st century. The purpose of our endeavours over the years, firmly rooted in our Spirit of Faith, has been our commitment in Hope to Transforming Lives and especially today, with the urgent need for a new creativity and vitality. This is the meaning and process for our common understanding of a renewed Educational Service in the context of Malaysia.