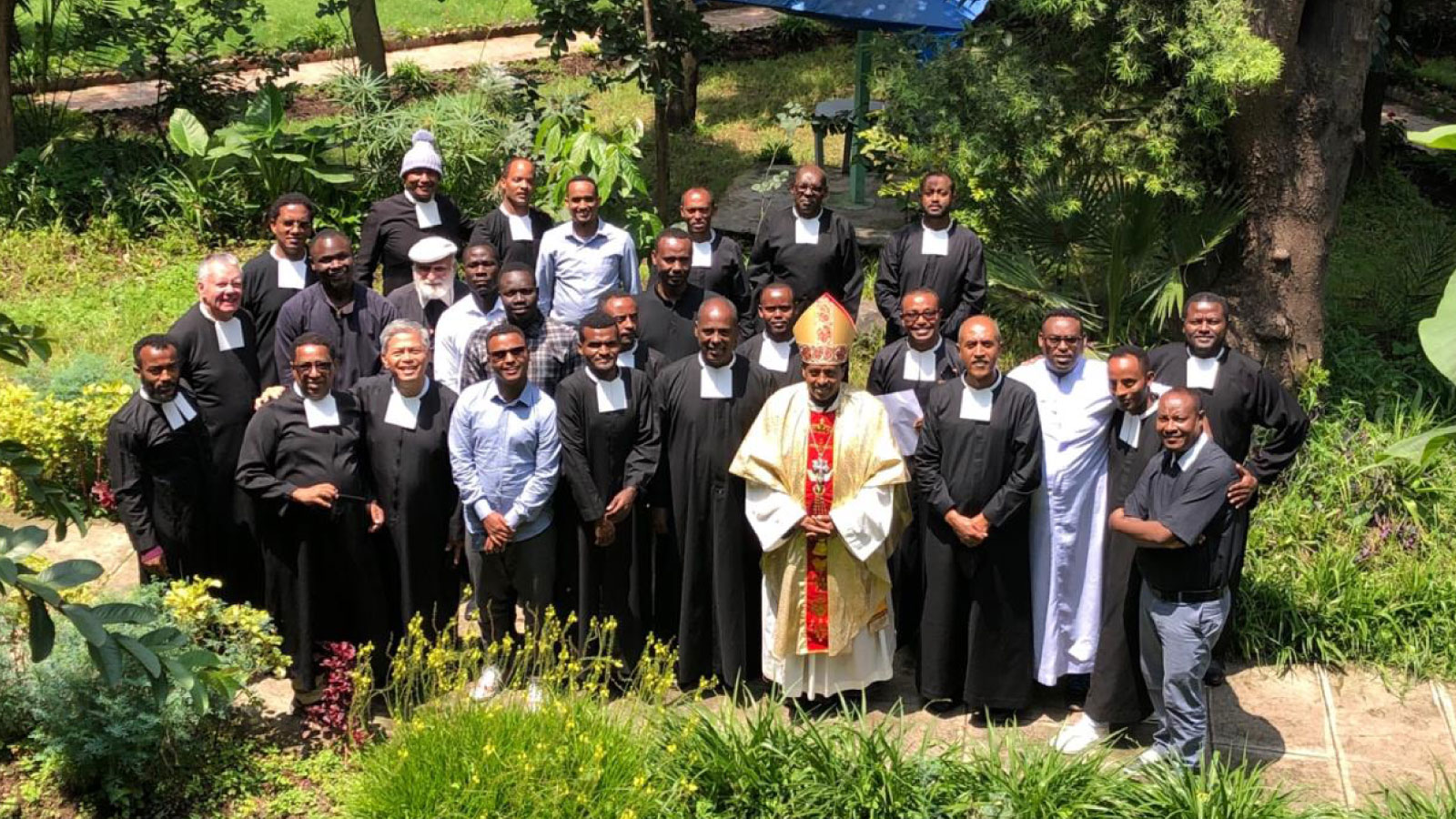 Adrien Nyel Late In My Life.pdf

Time flies. It has already been 10 months since I have moved here to Ethiopia and a lot has happened since.

It was still before the Pandemic when I chanced across Armin having his haircut in the 1911 community in Taft, Manila. I pushed my head into the small crack of the door and said hello. In the normal and usual Armin fashion when he needs something he said, “Hans! Can I speak with you for a short while?”

Like the Founder, I should have said no from the very start. What is it about chance encounters in our Lasallian tradition – they tend to take on a Nyel-type of life? Instead of finding an excuse I said sure and that is when he popped the question. “How would you like to go to Africa?” I laughed and said that I would be back and went to my room.

I thought about the question as I returned to my room to put down my stuff. My thoughts wandered to my mom who had recently passed away and how I was “freed” from the worry and burden of caring for an aging parent. Then I thought of Br. Ceci, who like me was in a cushion job in DLSU-Manila with all the many little benefits in the community and how he gave it up to go to what was then the Mission School in Ozamiz city. Ceci’s selflessness during that time inspired me then and inspired me once more. Lastly, I thought of my age, I was 52 then. I knew if not now, age would say not ever.

So, I turned around and walked back to the community barber shop and said “yes” and somehow that changed everything. Armin seemed to be as shocked with the answer as he was with asking the question. Up to today, we both look back at that particular time, unsure of how things really transpired, yet assured that God moves in mysterious and wonderful ways.

With COVID it was difficult getting a working visa and leaving for Ethiopia but eventually I landed in November 2021, a new adventure lay ahead. Adjusting was amazingly simpler than I thought it would be. Don’t get me wrong, the culture, place, climate and food are REALLY different from Southeast Asia but I found myself adjusting quite well to the food and the place. Often when we think of Africa, we think of the hot and dry place like on the savanna or in the Sahara. But Addis Ababa, the capital of Ethiopia, is actually 2,355 meters above sea level. The average temperature is 24°C during the day and 9°C during the night.

The Brothers Community is international in composition. When I first arrived, I made up the 4th member of the community. The community members are: Br. Ghebrehiwet Eyasu from Eritrea who is the director of the community, Br. Carlos Gomez, from Colombia was our president, and Br. Getachew Nadew the Vice President of Academics and Provost. The Brothers have been very helpful to me adjusting to life here in Ethiopia. It is also interesting to note that the community is directly under the Superior General and the Institute in Rome and not under the Charles Lwanga District of East Africa.

The school originally started when the Cardinal Berhaneyesus Demerew of Addis Ababa visited the Pope in the early 2000’s and asked him for a Catholic University in Ethiopia. Thus, the Catholic Bishops Conference of Ethiopia with the Papal Nuncio in Ethiopia, entered into an agreement with the Ethiopian Government for the establishment of an Ethiopian Catholic University. A group of Dominican Friars from the Philippines established the school around 2008 calling it the Ethiopian Catholic University of St. Thomas Aquinas (ECUSTA). The Dominicans eventually returned to the Philippines. Under the pressure of other European Episcopal Conferences who were funding the school, the Cardinal visited our Superior General, Br. Robert Schieler, FSC. The Cardinal asked the Institute to manage and administer the school. After some years of study, the Superior General and the Institute in 2017, sent Br. Augustine Nicoletti, FSC to be the first Lasallian President of the ECUSTA Higher Learning Institute.

ECUSTA is in the south-western most edge of Addis Ababa. This large 60-hectare campus is somewhat separated from the city proper by a 10-minute rough road but once inside the campus gates, it has a very beautiful view of the Oromia countryside. This serene novitiate-like setting has 7 main buildings that were constructed with the help of the Solidarity Foundation: three classroom buildings, an administration building, a lecture hall, a women’s dorm and a cafeteria. In the middle of the campus stands the Kibur Hiwot Medical clinic. Sadly, the clinic closed due to a lack of funding and some mismanagement. Yet, the campus is so vast that a big chunk of the property is still being used for growing different crops of wheat, teff and maize. Oh yes, there is an Episcopal Residence House on campus but sadly, there is no Brothers Community on campus. The Brothers, at this time, have a portion of the women’s dorm for their residence.

Currently, this start-up institution has 250 students in 3 programs, Medicine, Medical Laboratory Technology and Social Work. The government has announced that the National Exams for the Grade 12 students will be in late September, so we hope to accept a new group of Freshmen in the month of January. Fingers-crossed, we hope to get at least 60 new students distributed in the three programs.

On the side, we are also creating a State-of-the-Art Medical Laboratory set up by an international NGO called World Connex funded by USAID. The physical infrastructure is in place. However, due to COVID and the local political conflict, the delivery of the laboratory equipment and machines has been delayed by 2 years but hopefully will be sent before the end of the year. When this is up and running, it will be capable of analyzing around 1.5 million clinical pathology tests per year generating an income to make the laboratory self-sustainable, to fund a number of projects of the school institution, and to sponsor at least 25 scholarships for Medical Laboratory Technology.

Life here in the past 10 months has been quite interesting to say the least. My only prayer was that I be of service to the school for I did not know how I would fit into a Medical school since I was from the Br. Andrew Gonzalez, FSC College of Education of De La Salle University. So far, I have been the Freshmen coordinator and the Campus Minister of the school. I am also helping out with special projects like trying to find funding and making project proposals for the reopening of the Kibur Hiwot Medical Clinic.

ON the first 2 months of my arrival, the war in Ethiopia was at its height. The rebel forces were a mere 100 kilometers from Addis Ababa and once again I made a choice – to leave the country as I was ordered by the Philippine Government or to hide and stay. As things seemed to calm down a bit, another armed tribe threatened to enter the campus and take it over, but they did not, and we are all safe. But now tensions seem to be rising once again in the north and we shall see where things will go.

Amidst these interesting experiences, on May 23, just a few days after Armin was elected Superior General and Carlos was elected Vicar General, my phone ran – it was Armin … I knew I should not have answered that call. For once again, it was that Adrian Nyel feeling where I should have said No at the very beginning. But like a fool once again, I answered the call. A new role once again has been asked of me amidst these difficult times.

This is my Ethiopian Experience where one yes has led to other yesses. And that has made all the difference. Be careful for what you pray for. I prayed that I might be of service in my new assignment and God in his wisdom has seen to. I have learned one great insight these past few weeks. Amidst the intense worry and anxiety of what lies ahead and of what has been thrust upon my shoulders, a simple prayer rings in my ear – “Jesus, I trust in you.” And here in Africa, I feel an intense embrace of love and support from a God who is walking alongside me. My eyes tear up at the love that surrounds me intensely in this my Ethiopian experience.

Brothers and fellow Lasallians, I know it is a far reality from our Southeast Asian experience but please pray for Ethiopia. There are over 22 million people who are starving in the sub-Sahara region north of where I am because of climate change. Adding to this problem is the on-going war between the Tigray forces and the government causing the inflation rate to soar to over 30%. Include in your prayers our Brothers and Lasallian family in Eritrea as well; the government has taken everything away and the Brothers and Lasallian partners struggle to survive. Namaste and God bless.