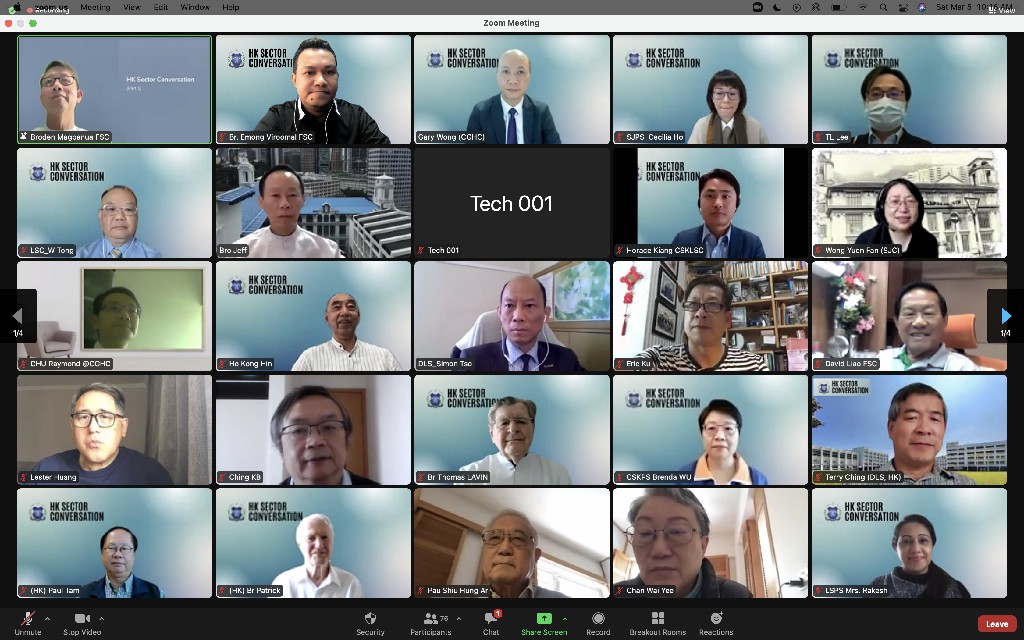 HONG KONG – One central topic and over seventy representatives.

The number seems to speak for itself – Hong Kong is ready to address meaty topics regarding mission opportunities in the sector, notwithstanding the inconvenient pandemic situation.

Various representatives of the HK Lasallian family showed up in an online platform to take part in conceiving, planning, and rethinking the current and future state of the Lasallian mission in Hong Kong. Joining the spirited discussions were members of the Lasallian Education Council, alumni, youth volunteers, administrators, teachers, and students each taking with them their distinctive insights. The Brothers were also present and performed valuable duties during the two-hour assembly.

In order to bring all participants to the same plane of understanding and expectation, Br Dennis Magbanua FSC explained that the discussions that morning would mainly revolve around the strengths, the challenges, and the future of the Lasallian Educational Mission in Hong Kong.

Br Patrick Tierney FSC’s report focused on the Acts of the second LEAD Assembly held in 2018. Stipulations in the said assembly includes (1) the promotion of shared mission within the district, (2) ways of inspiring young Lasallians, (3) engaging the HK Lasallian family more deeply, and (4) mobilizing HK resources for the benefit of LEAD.

The report proved to be ample to jumpstart the detailed discussions eventually enriched during the Breakout Sessions, which lasted for 45 minutes. Each breakout group consisted of about 8 members who were expected to share their thoughts and reflections on these two prompts:

Having left the breakout rooms, the participants returned to the plenary to have quick exchanges on whatever transpired in their respective breakout discussions. Later on, Br Tom Lavin FSC had every one’s attention as he gave his synthesis of the entire sector conversation. Among the items that he capitalized on were (1) the importance of forging bonds and network between and among schools, (2) incorporation of the spirit of service in the formation programs of students and staff, and (3) sharing of resources in a more structured way.

When the assembly reached its end, new directions, new aspirations, and new hopes for the sector were included as intentions in the closing prayer which was led by Br Mikey Cua FSC.