170 And Forging Ahead: A Mission That Inspires 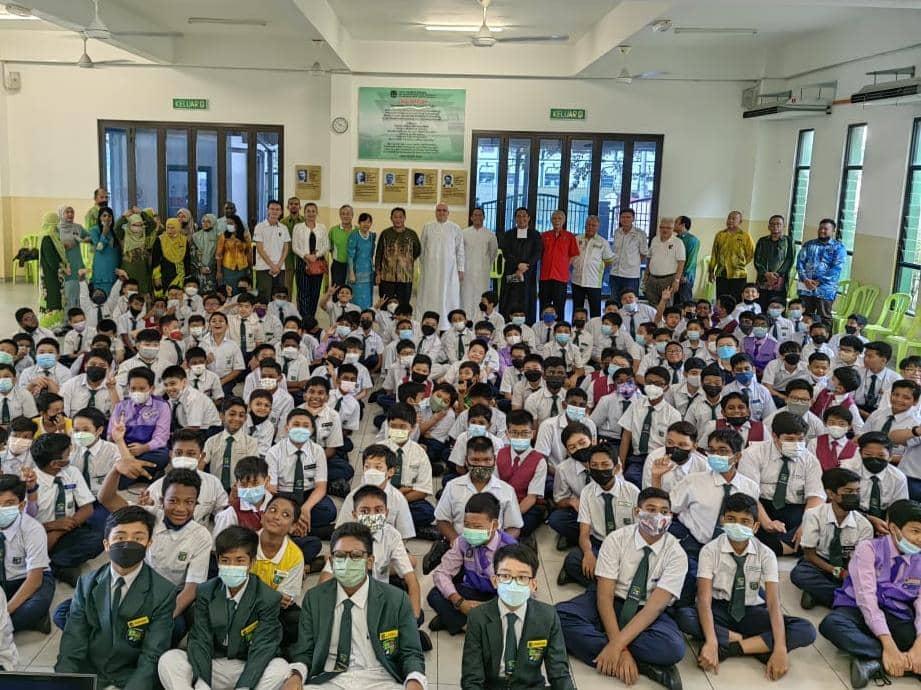 MALAYSIA - In 1852, six De La Salle Brothers arrived in Asia through the Straits Settlements, specifically Singapore, with the hopes of establishing schools that would cater to the needs of the faithful. Upon their arrival in Singapore, three of the six Brothers then headed to Penang to establish the first Lasallian school in Asia, Saint Xavier’s Institution. It is noteworthy that while Penang was the site of the first school founded by the Brothers, the Brothers began their first ministry in Asia in Singapore at what was known as Saint John’s, eventually renaming it to Saint Joseph’s Institution in 1867.

Fast forward to 2022, 170 years later, Brother Antonio, Brother Carlo and Brother Miguel took the same steps as the first three Brothers in Penang from Singapore. Their visit to Malaysia was in response to an invitation from the La Salle Centre in Ipoh to have students and teachers interact with young Brothers and for the Brothers to share and promote the three Lasallian core values of Faith, Service, and Community. Moreover, the visit to Malaysia was an opportunity also for the young Brothers to experience the Lasallian mission and family in Malaysia as they, together with Singapore, celebrate 170 years since the first arrival of the Brothers in 1852.

In total throughout their 12-day stay in Malaysia, the Brothers visited to six (6) schools and two (2) branch schools, namely:

Throughout their visit to West Malaysia, the Brothers from the sector of Singapore were welcomed with pomp, joy, and enthusiasm by the different Lasallian communities. What was common throughout the visit was how warm the welcome was every time they visited a certain community. The uniqueness and the vibrancy of the local culture were showcased each time a school presented their performances, such as the flanking of the uniformed student personnel and the school military bands that played school rallies and hymns, as the Brothers entered the schools.

The highlight of the visit were the students. Each time the Brothers addressed the school or a group of Lasallians, the students were first and foremost acknowledged as they are the purpose of the Brothers’ visit. It was a meaningful engagement as the Brothers not only shared about the core Lasallian values, but their story on how they became De La Salle Brothers and what makes them want to live out the rest of their lives as Brothers. It was through this encounter that the Brothers hoped to ignite a spark of renewed interest in the life of the Brothers.

Another group that the visiting Brothers met throughout their stay in Malaysia were the Old Boys, who were also filled with enthusiasm and hope to meet the Brothers. In the Brothers’ conversations with the Old Boys, they, too, echo the call for more Brothers to come visit, and even work in Malaysia. In the stories of the Old Boys, they recall how the Brothers were excellent teachers and, indeed, bigger Brothers to them. It was the Brothers who inspired them to become the best persons they can be through how the Brothers taught them, and how they treated them when they were students. It was a walk down memory lane for the Old Boys who dearly missed their Brother-teachers. In addition to their stories of the Brothers, the Old Boys also shared with the visiting Brothers about the role they play in keeping the Lasallian ethos and tradition alive as they recall the words drilled into their minds: enter to live, leave to serve. They live up to this spirit as they continue to serve the mission as members of the Board of Governors in the schools, raising funds to help develop and maintain the schools they continue to call their home, and to ensure that the place they call home will be a home for students who walk in its hallways. Yes, the Lasallian mission is enduring, forging ahead after 170 years, inspiring Brothers and Lasallians throughout the sector. The mission is alive!

The Brothers came back to Singapore with grateful hearts to those who made their visits to the students and the schools successful and with a greater awareness and perspective of the Lasallian mission in LEAD. May the God who guided the first missionaries to the Straits Settlements bless the sector of Malaysia and the congregation with Brothers who will willingly bring the joy of the Gospel with fervent zeal and unyielding faith to create a community who will forever serve the last, the lost, and the least, making the kingdom of God ever-present and truly alive in the world today and in the future. (Text: Br. Miggy Crisostomo FSC; Photos: Br. Miggy Crisostomo FSC, Br. Carlo Rementilla FSC, Mr. James Sia)

Some local news articles of the Brothers’ visit: (click on the titles to visit the webpage)