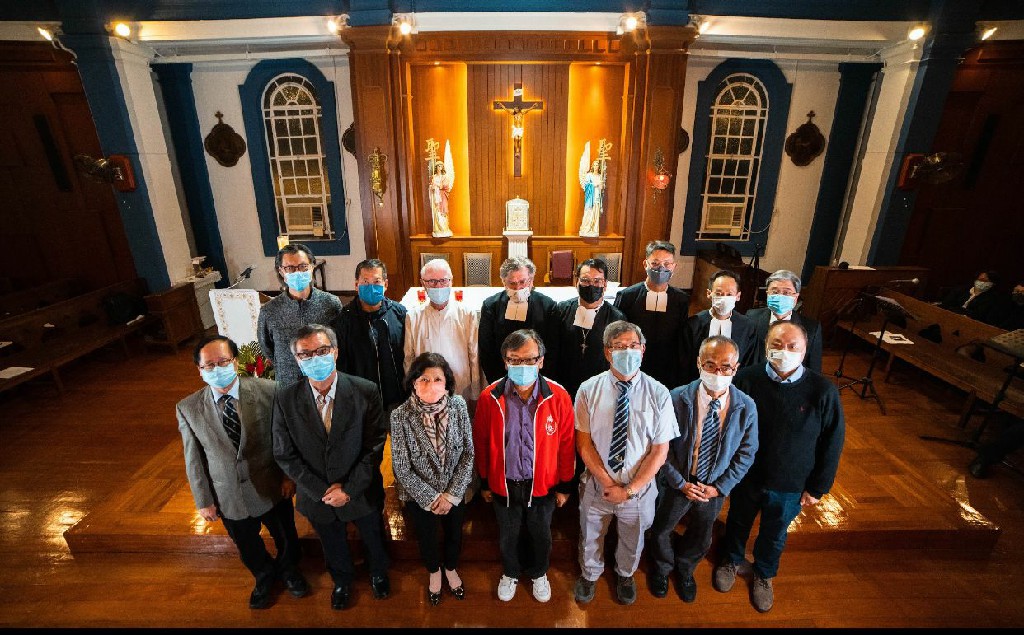 First time in HK after half a century

HONG KONG - December 8, 2021 is certainly one date the Hong Kong Lasallian family would never deign to forget as Br. Angelo Paolo “Br. Paul” Mata FSC had chosen it to be the day he said forever to the Brothers. For a sector that has not seen the rite of final vows of a De La Salle Brother in over fifty years, Br Paul’s profession in Hong Kong is, as one might say, precious.

Prior to the Eucharistic celebration, Br. Patrick Tierney reminisced about his rite of final vows in Hong Kong which took place in 1967. In the same sharing, he helped the attendees understand the meaning and impact of Br. Paul’s profession on the current state of the Brothers’ ministry in the country.

Though he was unable to make his profession in the Philippines, his homeland, due to travel and health restrictions, Br. Paul was grateful to have received so much support from Hong Kong Lasallians, who made the mass and the rite of final vows possible. The evening's Mass was presided by Fr. Jojo Ancheril CMF with Fr. Alan Wong SJ, Fr. Joseph Haw SJ and Fr. John Wang SJ concelebrating. The altar servers, Eric Wong and Dustin Li, were old boys from La Salle schools in HK. Ms. Edith Ng of De La Salle Secondary School made sure solemn music was in place by bringing with her the Charis choir. Present, too, was Br. Jeffrey Chan who served as commentator. Br Mikey Cua, Ms Maggie Lam of St Joseph's Primary School and Ms Amy Lo of St Joseph's College served as lectors. Mr. Raymond Chu of Chong Gene Hang College and Ms Wendy Wong of La Salle Primary School led the Prayers of the Faithful.

Working behind the scenes were dedicated HK Lasallians that comprised the technical team headed by Ms. Nikki Chan. Together with Dr. Timmy Lo of De La Salle School, she was in charge of the event’s social media live feed among others. The highlights of the event were documented by Mr. Mark Huang and Mr. Jeffrey Or, the main photographers of the program.

Aside from Br. Patrick, Brs. Dennis Magbanua and Tom Lavin were also present to perform customary yet significant roles in the program. In his shared reflection, Br. Dennis revealed how well he has known Br. Paul even before the latter joined the Brothers. His exhortation centered on how Br. Paul has always embodied the image of “Kuya” to the people he has met. He explained that the very word, which also appears in Br. Paul’s email “kuyapaulfsc@gmail.com”, aptly defined his passion for being an “older brother” to his students.

Before Fr. Jojo said the final blessing of the Eucharistic celebration, Br. Paul was given the chance to share his response. “This journey has empowered me to share my voice and presence. The Brother’s life has allowed me to find fellow companions who, to me, may not be related by blood but have significantly become ‘family.’ Today I am chosen. Today I also lovingly and humbly choose the One who has chosen me. Today, this ‘yes’ leads me to a tomorrow I know not, but with a certainty that the One who called is already there,” said Br Paul. He ended his response with a prayer that he himself composed:

Dear God, THANK YOU! For the grace to find you and meet you in the many faces, places, For the truth of the here and now, For the hope that tomorrow carries, For the shadows that have been brought to light, For the resilience to carry what continues to weigh medown, For the courage to let go of what is no longer necessary, For the smile in my heart, For those and that which make my heart smile, For the many “NOs” that have allowed me to preservethis “YES” For the “yes” that has brought me to where I am today, For the “yes” that is You in its beginning and its end... Amen.

The on-site mass attendees were each handed a six- decade rosary as a token of thanks for witnessing the event.

Br. Angelo Paolo Mata FSC is a De La Salle Brother from the Philippines. His tour of ministry as a Brother includes teaching assignments in Iligan and Singapore, and now in Hong Kong. Prior to joining the Brothers, he had served in De La Salle Schools in the Philippines responding to the Lasallian mission in various capacities. In Hong Kong, Br. Paul is more commonly known as Br. Paolo. (Text by Br. Edmon Viroomal FSC, Photos by Mr. Jeffrey Or and Mr. Mark Huang)