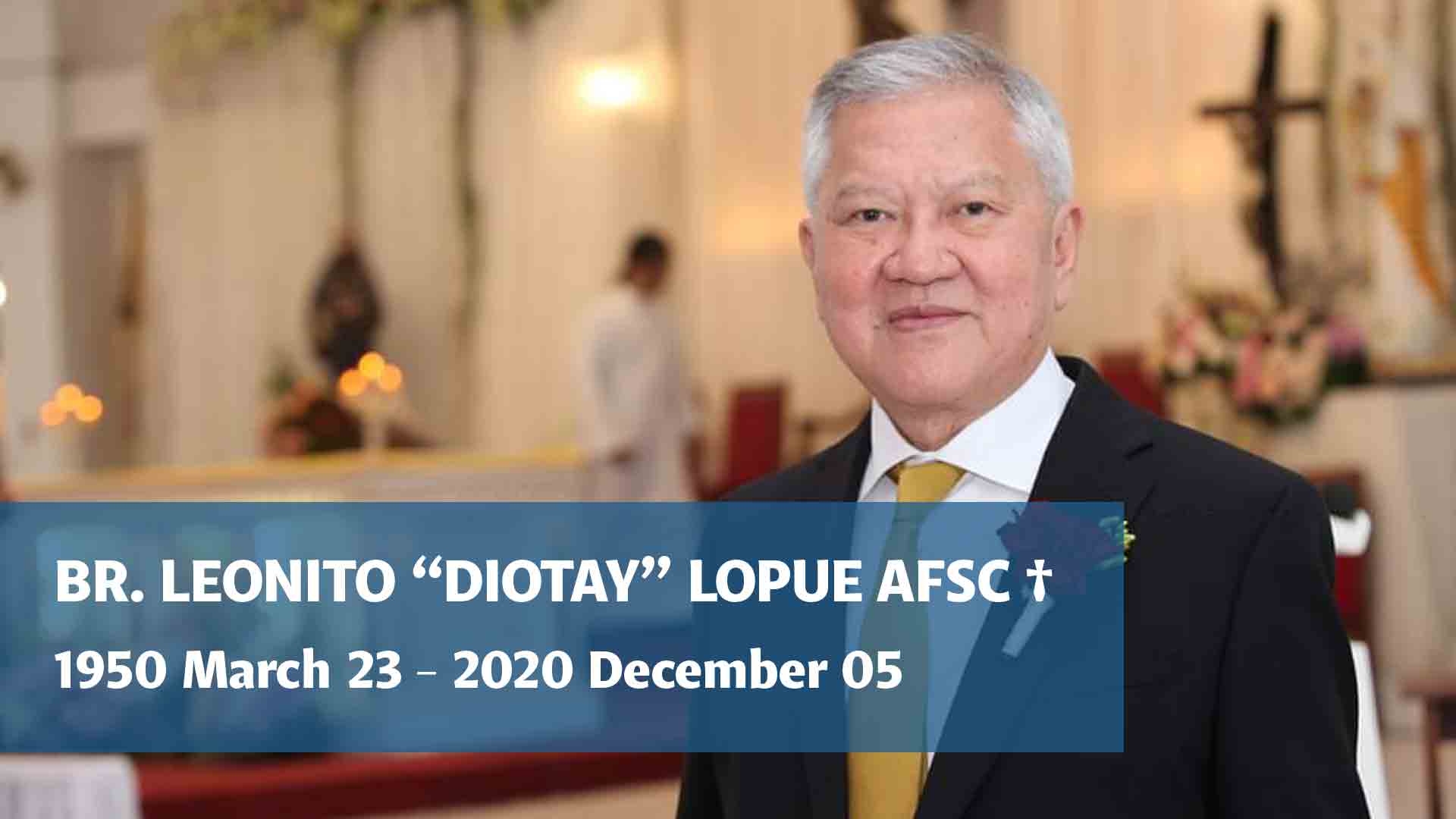 With faith in the resurrection, the Lasallian Family of the Philippines and the Lasallian East Asia District announce the passing of Br. Leonito ‘Diotay’ Lopue AFSC on 2020 December 05 at Bacolod City, Philippines. He was 70 years old and an Affiliated Member of the Institute for 6 months.

Eternal rest grant unto Br. Diotay, O Lord.
And let perpetual light shine upon him.
And may the souls of all the faithful departed, through the mercy of God, rest in peace.
Amen.

A man who lives by what he believes --- this is Br. Leonito D. Lopue AFSC or fondly known to most if not all of the Negrenses as “Diotay” or “Sir Diotay.” As he returns to our Creator, we pay tribute and express our Gratitude to a Lasallian gentleman whose passion for life is to be of genuine service to others especially the vulnerable and less fortunate in our midst. Such passion was clearly evident in all of his life. His engagements were grounded on his strong desire to help and even provide life-giving, empowering, and enabling opportunities for everyone, especially the poor. Coming from a humble family whose retail trade became successful through hard work, perseverance, and their Lasallian education; he made it his personal commitment to make sure that the people who work with and for him and his family are justly treated and appropriately provided. In addition to this, he was not a man that forgot his humble beginnings. With strong conviction and resolve, he made conscious efforts to ‘pay it forward’ by continuously supporting the Lasallian mission in three schools - University of St. La Salle, St. Joseph School-La Salle, and La Salle College Victorias - in various capacities throughout his adult years and even in the compromised state of his health.

As a sportsman himself, through many decades, he championed the table tennis sports in the City of Bacolod, the Province of Negros Occidental, and in the country. He helped the table tennis program of the University of St. La Salle by providing sports equipment and valuable space in his Lopue’s San Sebastian Mall providing an international standard venue for table tennis. He consistently emphasized the importance of sportsmanship and fair play to his players who look up to him as their mentor. Furthermore, he supported poor but hardworking players from the public schools to be educated in the Integrated School and College of the University of St La Salle.

Through the years, Br. Diotay has extended dedicated service to the many mission areas where few lay people are able to help. He volunteered and became Chairman of La Salle College Victorias and the Handumanan Science Foundation which provided educational scholarships to financially-challenged but deserving students. He has been very supportive of the apostolate for youth offenders at the USLS Bahay Pag-asa Youth Center where he once was a member of the Board of Advisers. He also served as member and later as Chairman of the Board of Trustees of the University of St. La Salle for many years, and he assisted the Brothers in navigating local and national realities that became a challenge in our mission in Negros Occidental. He supported various causes outside of La Salle, and even recently went on a mission to provide solar lamps to distant isolated mountain villages in the province.

Br. Diotay had been accorded numerous awards and citations befitting a man who had given so much of himself for the welfare of others and the community. Among these are the St. La Salle Award (1984), the highest institutional award given to an alumnus of the University of St. La Salle whose personal and professional life epitomizes our core Lasallian values of faith, zeal for service and communion in mission; the Banwahanon Award (2009), the highest accolade given to a resident by the Bacolod City Government in recognition of his notable contributions toward the betterment of the larger community; and the degree Doctor of Laws, honoris causa, conferred on him by the University of St. La Salle in 2005.

As a family man, he was a good and dedicated husband and father. With all his engagements in the bigger community, he made sure that he does not compromise quality time and presence with his family.

All of Br. Diotay’s efforts were done in his most quiet and unassuming ways, yet they all impacted the lives of many people, most especially the poor.

Indeed, we are blessed to have known such a person who was a gift to his family and to the society. Br. Diotay, your life has left us an example of what it means to be a driven and generous Lasallian Christian Gentleman. We will miss you but what you left us will never be forgotten. (Text: Br. Vincent Fernandez FSC)

Click the link to view the LEAD Story article on Br. Diotay’s affiliation: