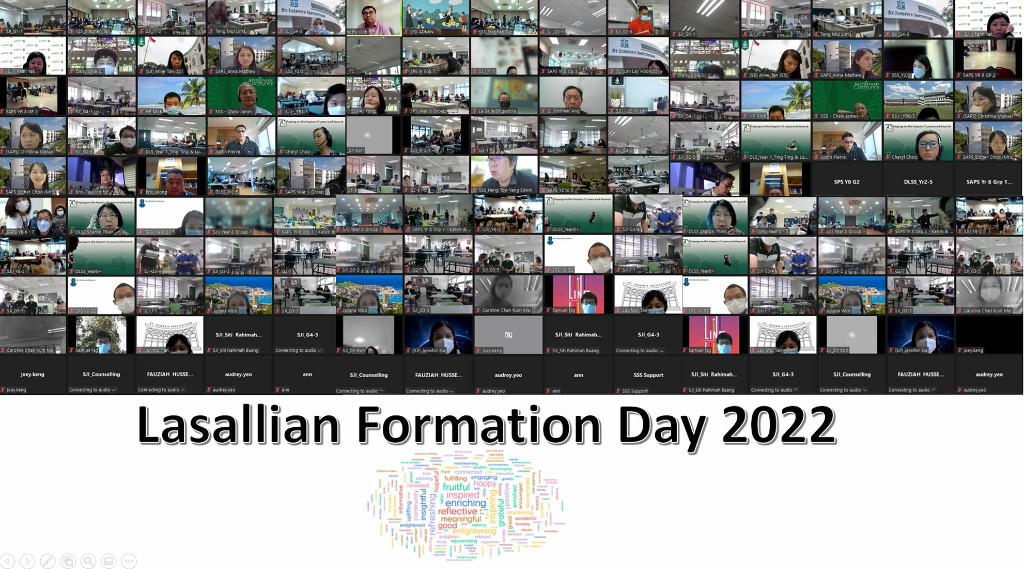 SINGAPORE – More than 600 teachers from the six Lasallian schools and their school leaders gathered online for the annual Lasallian Formation Day on Friday, 11 March 2022. The theme was “To dream is our way forward.” After the Opening Prayer prepared by Br Carlo, Br Ricky Laguda gave an Opening Address inviting the participants to have a vision for the future, an imagined utopia that can further our Lasallian mission wherever we are. The participants were divided into groups according to the number of years that they have served in our schools. The first group were those who have been in our school for their first year and their topic is the life of the Founder; the second group consisted of those who were here for 2-5 years and they discussed the 3 of the 12 Virtues of a Lasallian teacher; the third group were those from 6-7 years and looked at the evolution of the Institute from the 18th -20 th centuries; the fourth group were those eight years and above and had conversations in preparation for LEAD’s 3rd Mission Assembly. There was a separate group for the school leaders, that is the principals and vice-principals, which discussed the need for more formation as to the identity and characteristics of a Lasallian school.

Each group had a separate topic for which resources were prepared and the facilitators from each school would deliver the content and facilitate the discussions for their respective schools. In this way, the teachers who were facilitators had to digest the topic and present the topics to their fellow teachers. This helps the teachers themselves know and reflect on the different topics. There is also a hope for 2 more meetings on a school level in the year to instill what had been discussed. The feedback thus far has been very positive from the data that was gathered. (Text & Photo: Br. Nicholas Seet FSC)