Walk With Bro Series Of The DLSAA 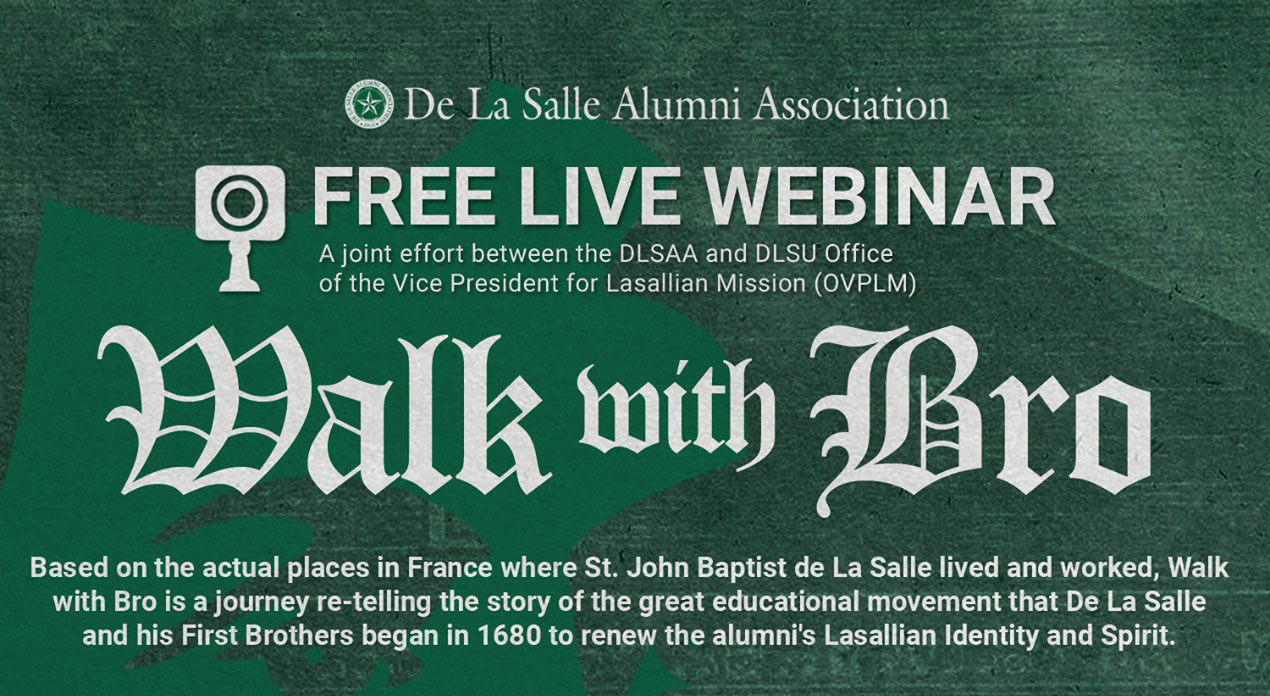 PHILIPPINES - The Walk With Bro Series (2020) was positioned as a free live webinar. This is a joint effort between the De La Salle Alumni Association (DLSAA) and De La Salle University (DLSU) Office of the Vice President for Lasallian Mission, headed by Ms. Fritzie de Vera.

5 Christian Brothers were initially lined-up to be part of the series. And, each Brother was given a topic to share. Their stories/sharing was based on the actual places in France where St. John Baptist de La Salle lived and worked. Walk With Bro is a journey-telling the story of the great educational movement that De La Salle and his first Brothers began in 1680 to renew the alumni’s Lasallian identity and spirit. The 5 Brothers that were lined up for the event were the following:

The series ended last March 20, 2021 with Br. Robert Schieler FSC, Superior General of the Institute of the Brothers of the Christian Schools. His topic was Moving Forward with the Lasallian Mission: Insights from the Superior General. We can proudly say that we had close to 200 attendees.

The series was conceptualized sometime July 2020. Having just taken office as President of the De La Salle Alumni Association (Manila), our goal was to have a refresher under the supervision of a La Salle Brother. Br Michael Broughton FSC was tapped to refresh the Board of Trustees of the DLSAA, specifically on values learned and taught by St. John Baptist De La Salle. Focus was on the fundamentals of the Lasallian Educational Heritage using as a model the Lasallian star. It was right after this where we asked ourselves what else can we do for the alumni community. It was going to be quite a challenge considering the presence of Covid-19 in our country. The key question was, how are we as an Association going to engage the alumni community? And so we looked at our most valuable resource, the Christian Brothers. Fortunately for us we were honored also with the presence of Mr. Ramon del Rosario AFSC, a distinguished Lasallian in his own right, and has proudly said that the values he gained from his Lasallian education, he has passed on to his many companies in the private sector that he leads. Again, without a doubt, this series was possible due to the tireless efforts put in by the Office of the Vice President for Lasallian Mission. (Text & Photos: Mr. Karl Velhagen)