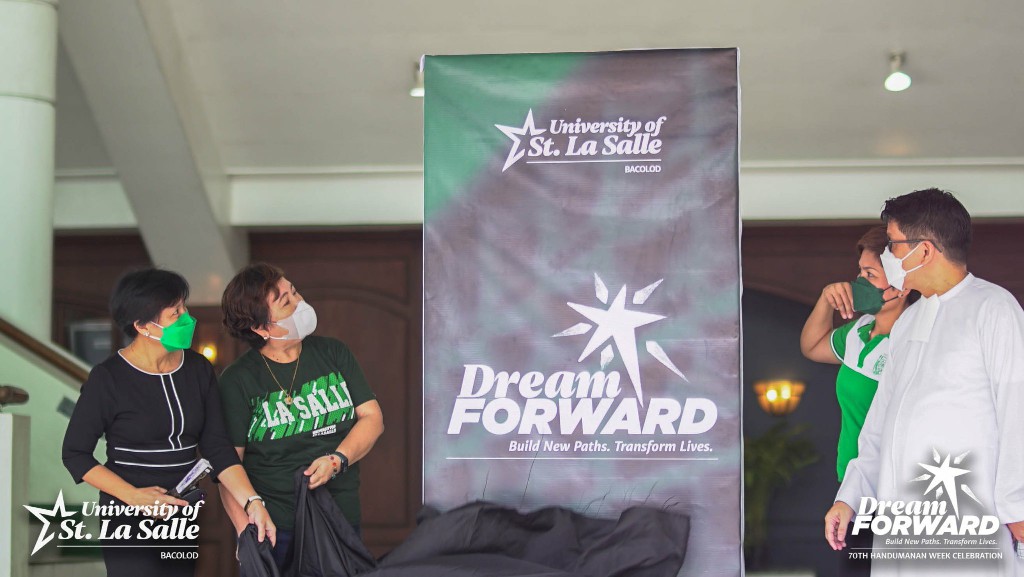 PHILIPPINES - Anchored to the theme from the General Chapter of the Brothers of the Christian Schools “To Dream is Our Way Forward: Building New Paths to Transform Lives", the University of St. La Salle (USLS) celebrated the 70th Handumanan Week (Founding Anniversary) with the theme: DREAM FORWARD: BUILD NEW PATHS. TRANSFORM LIVES on June 27 to July 1, 2022.

The term Handumanan means remembrance in the local language – Hiligaynon.

Day 1: The week-long celebration started with the Handumanan Mass at the USLS Main Chapel followed by the Handumanan Week Opening Salvo with performances from the Ritmo Verde Drumbeaters and The Musikat at the Coliseum Lobby. After which was the Earth Keeper Activity, an annual tradition of planting a tree on the campus. The 68th, 69th, and 70th Tree were planted at the college plaza by members of the USLS Administration. Members of the USLS community walked down memory lane at the Museo De La Salle – Bacolod featuring a Lasallian Exhibit on the 70-year history and heritage of the university. The new university logo, institutional annual theme, style guide, and communications kit were also launched. Men’s and Women’s Volleyball, and Men’s Basketball Exhibition games with our La Salle Stingers Team were also held at the coliseum.

Day 2: A fun run and fun walk was held at the Dizon Sports Complex, a fitting warm-up activity for the Bayle de La Salle where members of the community grooved their hearts out headed by the Physical Education, Sports, and Recreation (PESAR) Office at the Coliseum. This was followed by volleyball and basketball exhibition games for the employees. Later in the day, a thanksgiving mass and a donors’ night was held in celebration of the 20th Anniversary of the USLS Bahay Pag-Asa Youth Center (BPYC) at the Granada Campus.

Day 3: The third day began early as Lasallian biking enthusiasts joined "Charge of the Green Brigade" This is also in support of the 30th Provincial Environment Month. A chill ride around Circumferential Road was followed by the planting of Batwan wildlings at the Agribusiness Farm and Bahay Pag-Asa Youth Center and the oath-taking of the La Salle Green Brigade Officers for the next school year. Later in the afternoon, to recognize the hard work and dedication of our Lasallian Partners, the Human Resource and Development Services (HRDS) office held the Service Awards Ceremony. This covers awardees from AY 2019-2020, 2020-2021, and 2021-2022. Lasallian Partners in 10, 15, 20, 25, 30, 35 and 40 years of service were recognized. The Juan Medrano award was also given to deserving faculty and staff who have served Lasallian schools for at least 25 years. Those who have served for more than 40 years include Ms. Ma. Jesusa Cuaycong, Ms. Ma. Teresa Golez, Ms. Ma. Socorro Faminialagao, PhD., and Ms. Lolita Quillano +. Awards were also given to the Lasallian Pa rtn e rs w h o e xh i b i te d me ri to ri o u s performance of their duties for the abovementioned school years.

Day 4: Fun and games filled the coliseum lobby for the Higher Education Unit (HEU) day in the morning and the Organization of Non-Teaching Office Personnel (ONTOP) day.

Day 5: In the spirit of joy and camaraderie, the Golden Jubilarians of Class ‘72 celebrated their 50th anniversary through the honoring rites after the Mass of the Holy Spirit and Thanksgiving mass held at the Coliseum. The alumni continued their fellowship with a lunch reception at the Miguel Lobby, reminiscing their Lasallian years and recalling how the university became their second home. Meanwhile, Lasallians in their respective offices celebrated the 70th Anniversary with the campus-wide Agape Lunch.

To mark its platinum year and capping off the week-long celebration of the 70th Handumanan Week, the university ended the festivities with a high note through the 70th Birthday Bash dubbed “USLS TURNS PLATINUM: Padayon sa Damgo.” (Continue to Dream) For the first time since 2019, live performances from the USLS Artists' Hub - Musikat, Maskara Theatre Ensemble, Vivace Strings, Ritmo Verde, De La Salle Chorale, Santermo, and Production Support Group - Basic Education Faculty, PESAR, and CELAM filled the Coliseum.The College of Nursing, College of Business and Accountancy, College of Arts and Sciences, College of Education, and Cast of Animo: One Man and A Dream - The Musical also joined the celebration with their own performances.

Br. Normandy Dujunco FSC, Vice Chancellor for Mission and Development and Chair of the Institutional Events Committee in his message said that our Lasallian story did not begin in 1952 in Bacolod and Negros Occidental nor in 1911 in Manila but in 1680 in France when De La Salle and the early Brothers began this educational ministry. and as current bearers of the torch it is our duty to keep the fire alive by dreaming forward, building new paths to transform the lives of those entrusted to us. (Text: Br. Irwin Climaco FSC; Photos: University of St. La Salle Official Facebook Page)