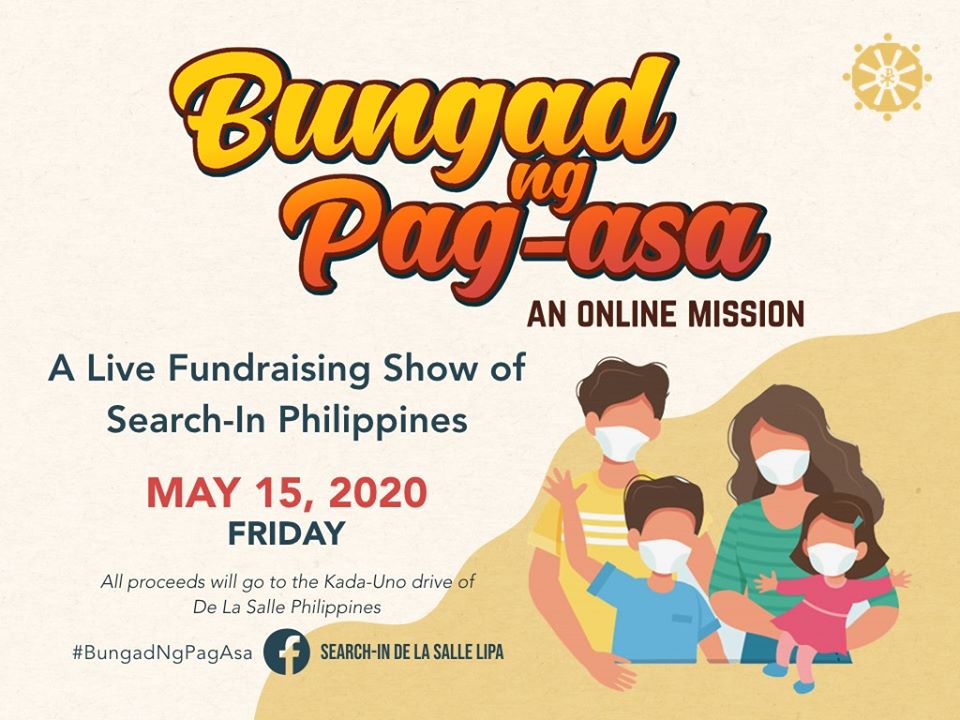 In response to the emerging social problems in the country brought about by the COVID-19 Pandemic, various Search-In communities in the Philippines partnered and had recently conducted an online fundraiser entitled “Bungad ng Pag-Asa: An Online Mission” last May 15, 2020.

Search-In is an inclusive religious and foundational organization composed of students from different La Salle Schools all over the Philippines. It is a group that helps students in recognizing their own identity and assisting them in living a life inspired by our Lasallian core values of faith, service and communion. Search-In also serves as an incubatory organization to prepare aspiring brothers in their future vocations in mission.

“Bungad ng Pag-Asa: An Online Mission” is a fundraiser that aims to fund the KadaUno Challenge initiative by the De La Salle Brothers of the Philippines. It offers a wide variety of dialogues between student leaders and members of the partnership amongst various Search-In communities in the Philippines. BNP also showcases the innate talents of some of the members of this organization.

With the goal of alleviating the grievances of the people and raising funds for the benefit of the marginalized, Bungad ng Pag-Asa stays true to its title of serving as a gateway to spread hope in this age of despair.

“I’ve always had a passion for leading, especially in situations where a group could help for a cause like Bungad,” says Tori Lualhati, the Head Producer of the fundraiser from De La Salle Lipa (DLSL).

The Head Producer also added that the whole team was nervous during the preparations as they were given merely 3 weeks to prepare a livestream which they haven’t done before.

During the Live event, various people from different La Salle Schools have offered their time and talents to attract donors and sponsors for Bungad ng Pag-Asa.  It started with the greetings of the hosts, Clarisse Avila and Jhustin Dipasupil, and then followed by some welcoming remarks by Br. Marvin Sipin FSC, DLSL VMO Head.

“I think that it is in our nature to be of service to others as Lasallians. As I came to be aware of the difficulties of other people during this pandemic, I was moved to respond in whatever way I can,” said the DLSL VMO Head.

It was succeeded by brief interviews with student leaders: Bea Luna and Abby Caig from DLSL, Samantha Ubiadas and Angelica Aquino from La Salle College of Antipolo, and a dialogue with former Idol Philippines Contestant, Vanya Castor from the University of St. La Salle Bacolod.

Star Performers such as Miguel Traspe and Angel Secillano from DLSU - Laguna, Marianne Osabel of La Salle Academy - Iligan and Vanya Castor and Ysanygo from University of St. La Salle - Bacolod were also present in the show.

“I was stunned by the performances as they are really good and the interviews were also very informative” says Richard Punongbayan of La Salle Academy Iligan.

Aside from the interviews and performances, “Bungad ng Pag-Asa” also had several challenges such as Translation Challenge, Spill Your Guts or Fill Your Guts Challenge, Smile for A Mile and Laws of Quarantine which made the live stream fun and engaging. While the hosts: Sophia Durana and Beatrice Recidoro from De La Salle University Laguna headed the shoutouts segment of the show.

Before reaching the conclusion of the show, the Head Producer, Tori Lualhati gave her closing remarks where she thanked the people who supported the project and the faces behind it.

“The project started small, but as time passed by, we saw the increasing number of members and volunteers from various La Salle Communities, which inspired us to work even harder. It was a good thing that the members of the Bungad Team had each other’s backs,” says the Head Producer.

Lualhati also expressed how the journey was a challenge but is fulfilling, knowing that they are able to help the Lasallian and Filipino communities. She also stressed that Bungad ng Pag-Asa didn’t only help thousands of families, but also created a new one – a unified family of Search-In Communities.

“It was difficult to pull off this kind of event given the short amount of time and the limitations, but I am thankful to God for giving me students who are committed and passionate to say ‘yes to life’ by saying ‘yes to serve’,” added Br. Marvin Sipin FSC.

The Head of the Vocations Ministry Office of DLSL also expressed that all praises are given to God who enabled them to build a stronger community with the common purpose to serve.

As of May 20, 2020, the fundraiser had collected 110,050 Pesos in donations and pledges through online bank transfers and has directed them to the KadaUno Initiatives of the DLSP.

The whole team behind Bungad ng Pag-Asa is expressing its gratitude to the people who have supported this noble cause and is hoping that this amount will create a big impact towards helping families who were negatively affected by the pandemic to get through their everyday needs.